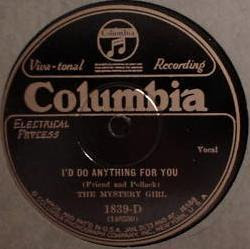 In 1929, Columbia Records tried to cash in on Actress & Singer Helen Kane's popularity. Helen Kane's first performance at the Paramount Theater in Times Square proved to be her career's launching point. She was singing "That's My Weakness Now", when she interpolated the scat lyrics “boop-boop-a-doop.” This resonated with the flapper culture, and four days later, Helen Kane’s name went up in lights.
Kane had excellent diction, intonation and timing, learned during her apprenticeship in vaudeville. Her songs have a strong word focus, and capitalize on her coquettish voice. She blended several fashionable styles of the late 1920s. These included scat singing, a kind of vocal improvisation, and also blending singing and speech. Sprechgesang ("speech-song") was fashionable at this time in Germany's Weimar Republic in both nightclubs and in serious music.Kane recorded 22 songs between 1928 and 1930.

Columbia Record's were the rival record company of  the Victor talking machine company,  The label issued four side's by an anonymous artist called the The Mystery Girl which had a distinctive baby-doll sound to it. according to the music sheet the recording's were recorded by Catherine Wright who was the same Kate Wright who later work'd for the Fleischer Studio's and provided the vocals for the animated character Betty Boop. 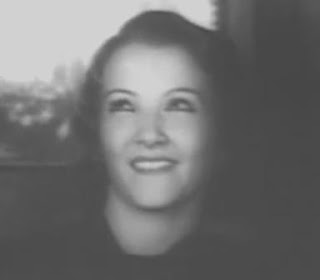 Above an image of  kate wright from the Fleischer Studios victory newsreel (1934).
This label issued four sides by a anonymous artist called The Mystery Girl hoping that the buyers would confuse her recordings with Helen kane's. So few sides were released which suggests that this attempt to exploit Helen Kanes fame was not successful.  It was also stated that kate wright had also entered the RKO Helen kane Contest, little did Helen know that by allowing impersonation contests she was allowing herself to be imitated at first helen was flatterd when people starting imitating her.

Above a Photograph of Helen Kane, Below Snapshots of the Caricature. 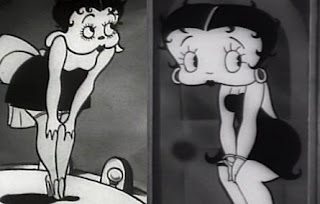 Although this attempt to exploit Helen Kane's fame was unsucessful  in 1930, Fleischer Studios animator Grim Natwick introduced a caricature of Helen Kane, with droopy dog ears and a squeaky singing voice, in the Talkartoons cartoon Dizzy Dishes. "Betty Boop", as the character was later dubbed, soon became popular and the star of her own cartoons. In 1932, Betty Boop was changed into a human, the long dog ears becoming hoop earrings.  Also to mention this Cartoon Caricature used to sing in her cartoons and sang 4 of Helen Kane's Recordings. Do Something, Thats My Weakness now, Dangerous Nan Mcgrew & I have to Have you.
Kate Wright who recorded as anonymous in (1929)  for columbia records also provided the vocals for Betty Boop from 1933, and then again in 1938 when the main voice Mae Questel refused to move with the fleischer studios. Afterwards Betty was then again continued by Majories Hines to finish the series from 1938 -1939. Kate never did many roles she was more of a backup voice actress when others were unavailable.

In May of 1932, Helen Kane filed a $250,000 suit against Paramount and Max Fleischer, charging unfair competition and wrongful appropriation in the Betty Boop cartoons. The trial opened that year with Helen Kane and Betty Boop films being viewed only by the judge. No jury was called, Little Ann Little, Bonnie Poe, Kate Wright, Margie Hines, and most notably Mae Questel were all summoned to testify.
The case dragged on for more than two years before the judge ruled against Kane, claiming her testimony did not prove that her singing style was unique and not an imitation itself; a little-known African American singer known as "Baby Esther" had been cited by the defense as "booping" in song, Helen Kane's biggest failure was that she was very easy to imitate and she disliked the imitator's becuse they were cashing in on her act. but it wasnt the imitators she should have been afraid of it should have been the animated character Betty Boop who was created for paramount by the fleischer studio's not to mention Helen had worked with the Paramount around 1929. In a 1959 Interview below Helen mentions nothing of Betty Boop or her imitators and speaks about her past.
Helen Kane (1959)  Interview & Songs -

Ran - Chan
Nothing much to say about myself.